A 5-minute walk to the famous Erasmus Bridge, 11 minutes with the water taxi for a movie in Lantarenvenster and 7 minutes by bike to the central station. One of the greatest assets of The Terraced Tower, as advertised, is its central location next to the river Maas in the heart of Rotterdam. Commissioned by Provast and designed by the architects at OZ, Besix realised the impressive new construction project, which owes its name to the terraces along the entire width of all the residential units.

The tower can boast impressive figures: 40,000 m² of surface area, 334 flats and a height of 100 m, which is good for 32 floors above ground. The length of the building decreases in height from 100 m to 35 m while the width increases from 20 m to 30 m. Underground there are 3 floors with 212 parking spaces and a bicycle shed for 688 bicycles. And on the ground floor, there is room for commercial facilities and catering establishments. The architecture is made up of terraces of different lengths. The slope of the building gives it a unique aesthetic character, but it also creates some challenges in the design of the structure that are discussed further in the article.

After the demolition of the former Erasmus Insurance office building, the first pile was driven in the summer of 2018. Exactly three years later, it is time for the official handover and interested parties can choose a spot 'front row' at the Boompjes in Rotterdam. 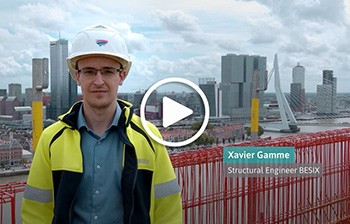 As general contractor, Besix was responsible for the realisation of The Terraced Tower. Xavier Gamme, engineer at Besix, worked on the project from the design phase up to and including the execution. There are a number of characteristics that typify the project and that have also created some challenges. Xavier is happy to explain how he and his colleagues came to an efficient solution.

When a project of this magnitude is started, it is obviously crucial to choose the right tools. The selection of the design and calculation software went very smoothly, according to Xavier: "At Besix, we mainly work with two programs and depending on the type of building, we sometimes choose one and sometimes the other software. SCIA Engineer is chosen for its user-friendliness and with its automatic tools for steel and concrete it was a real added value in this project."

Generally, a relatively large amount of concrete is required at the base of a building. Because of the height of The Terraced Tower and because the building provides a lot of underground parking, the load on the walls in the basements is so high that a high concrete quality C90 / 105 is required. However, this was not too much of a problem because with the help of SCIA Engineer all types of concrete could be calculated quickly and efficiently.

An asset for the finished project, but an additional challenge during the works: the location of The Terraced Tower. It certainly gave the team some extra thinking. Surrounded by a busy street, water and buildings on both sides of the site, the project team had to rely on creative solutions. The fact that there was no available space around the building pit and the need to work under existing pipes led to difficult construction phases for the basement. SCIA Engineer allowed them to work with a whole number of temporary construction phases - and thus also a whole number of models - in the program. In this way progress could be made in a structural way. The SCIA Engineer construction phases module could also be used well for the calculation of the relative displacements between vertical elements.

What Xavier remembers most about the location of The Terraced Tower is how there was not even a place to put a construction crane. "With SCIA Engineer, we made a calculation for a concrete frame that would accommodate a crane on the one hand and allow construction equipment to pass underneath on the other hand. It was a question of making optimal use of the space we had!"

The Terraced Tower is inclined with an 8 m cantilever that produces significant second-order effects. With the help of the SCIA Engineer module Stability analysis, the second-order coefficients were determined and the critical Euler load could be validated.

An important requirement for the building was that it had to remain stable even if a structural element was removed - because of an explosion or a terrorist attack. With SCIA Engineer it could be shown which reinforcement the team had to take into account. Xavier says: "This reinforcement can be calculated automatically in SCIA Engineer, which means that we saved a lot of time.”

When the building comes to life

For Xavier, the most interesting part of the project was, on the one hand, the brainstorming phase in which they looked at how the design could come into its own and, on the other hand, the execution phase in which the building really comes to life. "Thanks to SCIA Engineer and the automatic tools it offers, such as parametric modelling, I could concentrate on the real engineering work. In this way SCIA has saved us a lot of time and efficiency."

SCIA Engineer was used for the entire design of the project and allowed Besix to quickly design the reinforcement of the elements, which gave the team the opportunity to focus on the coordination and management of the project.

"The use of high concrete grade and the big cantilever makes it even more difficult, but thanks to the intensive use of SCIA Engineer, including construction stages, the realisation of this project was possible." 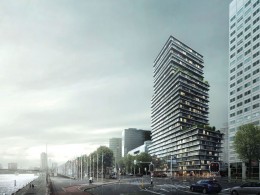 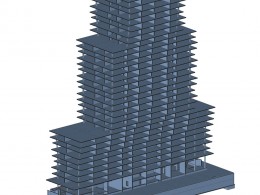 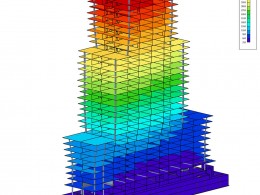 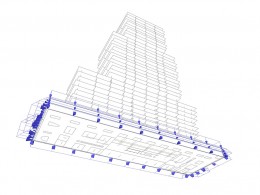 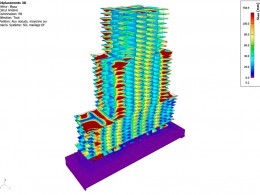 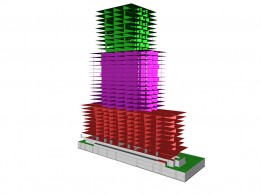 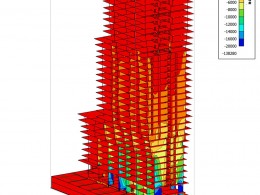 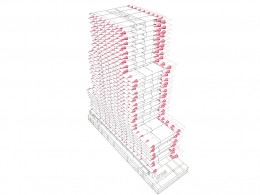