Previous version SCIA Engineer featured major extensions in composite beam design; the most significant of these were the extension of the checks towards beams with multiple web openings and the providing of a more economical design by implementing the rules of various NCCI's to EN 1994-1-1.

Recent extensions focus on quality and give a final polishing of this design functionality: users will find various smaller and larger improvements in the checks, output, AutoDesign as well as a noticeable improvement in performance.

The built-in stud design now takes building practice requirements into account in the case of secondary beams. Namely, studs are placed either in every trough, or in every second or third trough. The software chooses the most suitable stud configuration that fits the optimisation approach chosen by the user (e.g., to minimise the number of studs or to reduce the steel cross-section size). This design approach ensures a maximal utilisation of the studs and, therefore, a better and more economic choice of cross-section.

As a side effect, detailing conditions are managed in a more robust way. This solved issues from the past, where the rounding of numbers could result in the reporting of failing detailing checks and thus unsuccessful AutoDesign.

The additional provisions for stud count in the case of point loads along the beams remain supported, also in the case of secondary beams, where stud spacing is now constrained by the sheeting.

Extra attention was put on the efficiency of the AutoDesign routine, especially in the case of multiple web openings along the beams. Users should expect better convergence and that the software offers more economical solutions in general. 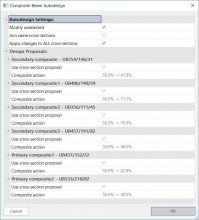 The goals we set for the report improvements in this version were:

For this, we focused on improving the Standard output, enhancing the available EWN (error, warning, note) reporting and providing all references in the Detailed output.

The Standard output serves as a design summary of all performed checks in the construction and the final stage for ULS and SLS and of all detailing conditions. We recognised that it is important to fit all important information into a document that remains short and readable. After reconsidering all available data in this report, the Standard output is now 30 % shorter on average; on the other hand, it provides more information than before. This decrease in size was achieved by removing less relevant details and replacing them with useful information, and by more efficient page usage as well.

Users will find the following new additions to the Standard output:

References were added consistently for all formulas in the Detailed output: this includes references to the various EuroCode pars, SCI NCCIs and other engineering literature. By following a strict convention, the Detailed output is now more readable, despite the fact that it refers to a large number of different standards and engineering publications. 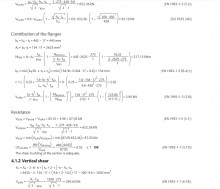 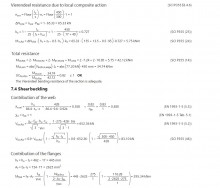 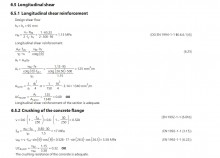 We identified that the text of existing EWNs in older versions was often not sufficient for users to immediately address issues in the settings or in inputs, without looking deeper in the calculation report or without reading more in the programme Help.

The phrasing of existing EWNs was, therefore, reconsidered; strings were made more informative and self-sufficient. Users now receive instructions on how to solve open issues via the EWNs themselves, which are, as before, plotted on the 3D structure and can be read by hovering on the composite members.

Where the EWN were too general or vague, these were split into multiple items that are more specific and easier to address. Where justified, warnings were switched to notes and vice versa. We hope that by better phasing and better structure, EWNs will now noticeably speed up the design process.

Users should expect significant speed improvements, particularly with beams containing multiple web openings. As an example, the calculation is 5 times faster on floors with an average of 3 openings per beam. With a higher average number of openings, users can expect even better speed improvement. This improved performance facilitates working with larger models.

SCIA Engineer offers quick and practical design for composite floors, including optimisation capabilities that result in economical solutions, compatible with building practice on the construction site.

The design is summarised in an informative and concise report that guides users when issues need addressing. For deeper investigations of the design approach implemented in the software, controlling engineers can address the Detailed output, where all formulas are written out and references are provided to the cited engineering standards and literature.