Steel fibre reinforced concrete (SFRC) is more and more used as construction material. Well-known are applications for industrial floors. Nevertheless, this material is also widely used in structural concrete elements where it is especially effective to cover crack widths in combination with standard conventional reinforcement. Currently there is no general part in Eurocode 2 [1] for buildings regarding steel fibre concrete. There are various standards and recommendations for the calculation of the steel fibre contribution. One of the most applied publications is the German guideline DAfStb [2] which was used as a basis for the numerical analysis outlined in this paper. Thus, company SCIA N.V. together with Bekaert N.V. as producer of DRAMIX® fibres developed a special tool for designing and checking SFRC structures. This tool was built in into finite element software SCIA Engineer and based on the German guideline. To gain a fundamental understanding of the structural behaviour, we have also developed non-linear FEM models, which contain a built-in module for SFRC structures. Numerical simulation results are compared to experimental performance of SFRC slab on piles of the Nanhui project in Shanghai in terms of ultimate load and crack pattern.

An expansion of new materials brings together with it higher demands on their design. This is valid also in case of concrete structures with steel fibers. When steel fibers are added to concrete matrices this leads to significant tension stiffening and higher toughness of the resulting material. The main question remains how to effectively verify such kind of structures. There is no general part in Eurocode 2 [1] for buildings regarding steel fibre concrete. There exist only recommendations like RILEM [3], Model code 2010 [4] from 2014 and mainly the German guideline DAfStb [2] which was used as a basis for the numerical analysis outlined in this paper. This guideline also extends the German national annex DIN EN 1992-1-1/NA. Currently preparation is already ongoing of the new draft of Eurocode where a special chapter about steel fibre reinforced concrete is presented in part L of this code.

The first complex solution on the market is resulting from the cooperation of the top worldwide producer of steel fibers  DRAMIX®,  Bekaert  N.V.  and  SCIA  N.V.,  a  developer  of  software  SCIA Engineer for finite element analysis of structures. The proposed solution is integrated into the program combining (i) a material library for a selection of predefined DRAMIX®  steel fibres and (ii)  a calculation tool providing design and check features of steel fibre concrete structures based on the German guideline DAfStb [2]. The design approach implemented in SCIA Engineer in relation to the DAfStb from 2012 is described in this paper.

SCIA N.V. together with Bekaert N.V. developed a unique solution for designing and checking of steel fibre reinforced concrete slabs. This is a one of the first known implementation of such a feature into finite element software (in this case SCIA Engineer). Bekaert N.V. provided their long-term knowledge in development and production of DRAMIX® steel fibres. A special library for steel fibre reinforced concrete is built-in for different concrete classes and dosages based on the selected DRAMIX fibre type. There are 3 basic types of DRAMIX® steel fibres included: 5D65/60BG; 5D65/60GG and 4D65/60BG [5].

The verification of the structure is performed based on ultimate limit state (ULS) checks:

Moreover, it is possible to verify local effects of column-punching on the slab. All the checks can be run on a fixed dosage or an optimized dosage based on the ultimate limit state. An equilibrium system for this state can be achieved if at least one of the following conditions are met (i) analysis with redistribution of moments within statically indeterminate systems, (ii) combination with reinforcement or (iii) normal compression due to external actions.

In SCIA Engineer, these characteristic residual tensile strength values are listed in the material library in function of the fibre type, dosage and concrete class.

kfc =1,7; member size effect; with one factor per material and per slab

The determination of the optimal dosage design is based on an iterative calculation of the ULS capacity loaded by a combination of normal forces and bending moment. The procedure searches the optimal fibre dosage in each finite element of the structure to reach maximal exploitation 100% and obtain equilibrium. The effect of conventional reinforcement is also included in the calculation in case this reinforcement is defined. The equilibrium of the cross-section is demonstrated on Figure 2. This figure clearly indicates the main advantage in the usage of steel fibre concrete in tension due to the existence of the steel fibres. The basic assumptions are also valid for steel fibre analysis:

The equations for static equilibrium of normal forces and bending moments are indicated in the following formulas.

The effect of steel fibres (νRd,cf) is considered in the calculation of  the total shear resistance  (νfRd,c) in addition to the regular shear capacity of concrete (νRd,c). The steel fibres behave as spread reinforcement and participate on the transfer of the shear loading. This can lead to significant savings on the traditional shear reinforcement, or even neglect it completely.

The shear concrete capacity νRd,c is calculated based on chapter 6.2 from the code [1]. The incrementation of the capacity caused by the steel fibres is expressed according to 6.2.2 [2] and it is dependent on the material characteristic of steel fibre concrete as follows.

The steel fibre contribution is considered in the same way in case of a punching verification. Nevertheless, when the required area of conventional reinforcement for punching is designed then based on Re 6.4.5 [2] the effect of fibres cannot be taken not account and only concrete without fibers is analyzed.

The calculation of crack width corresponds to basic assumptions of the Eurocode standard for traditional concrete [1]. The effect of fibres is considered by an additional factor αf, which is the ratio of the characteristic residual strength in SLS (ffctR,s) and the mean tensile strength of concrete (fctm).

Where maximal crack spacing (sr,max) is calculated as

In case of steel fibre concrete without conventional reinforcement it is necessary to apply a different approach where the crack width is calculated based on the following formula according to [2].

When the crack width is presented in the cross-section then the check of stress limitation usually doesn’t satisfy. The basic assumptions are the same as for the crack width calculation. The following list of stresses in particular components are checked in this verification:

As steel reinforced fibre concrete is being used more often, the real behaviour and investigation of the structure is essential. Especially for steel fibre reinforced concrete this non-linear analysis can provide the real behaviour of the structure with different results compared to the linear analysis. This behaviour is heavily influenced by the crack formation which is typical for fibre concrete. The toughness of fibre concrete is significantly increased by the existence of steel fibres up to values very close to standard reinforcement.

Physical non-linear analysis represents a very powerful tool for analysing any kind of structure in civil engineering created not only from steel fibre reinforced concrete but also from other materials. Generally, there could be significant differences of results compared to a linear analysis, especially in case of hyper-static structures. In case of linear analysis, only the E-modulus of the material is considered for the preparation of the stiffness matrix. There is no stress distribution based on increasing the strain in the component. On the other side the non-linear analysis provides a stress distribution and increase of the bearing capacity after reaching the ultimate strain until the collapse mechanism. This mechanism is based on different values of stress and strain, dependent on a predefined non-linear stress- strain relationship in the material diagram as defined on Figure 1.

The damage Mazarz material model is used for the non-linear calculation. This model efficiently enables the considered stress-strain diagrams with descending branches which is typical for steel fibre concrete in tension. The practical application of the non-linear analysis is demonstrated on a real test project of a foundation slab on piles in Shanghai [6].

In order to investigate the real behaviour of SFRC slabs on piles, a campaign of tests has been conducted at the Tongji University of Shanghai, China. The load test was performed on SFRC slabs from C40/50 and dimensions 4,3m x 4,3m with thickness 187,5mm supported by rectangular supports representing the piles, see Figure 3. There were used slabs with DRAMIX 5D fibres with 30kg/m3 and 35kg/m3. The load was imposed gradually by a hydraulic jack from the bottom to the top. At first the material characteristics were established by laboratory tests on 6 specimens based on EN14651 where especially their residual strength L1 and L2 were determined.

The presented non-linear model provides a good match with the experimental test. The comparison of the results with the load-displacement diagram coming from the test is visible on Figure 4 for Dramix fibres 5D65/60BG with dosage 30kg/m3 and 35kg/m3. This capacity is at the load level 283,9kN (299,0kN for 35kg/m3 respectively) where the ultimate tensile strain in steel fibre reinforced concrete (25‰) is reached.

The tight peak in the tension part of the diagram works as a “crack localizator”. This is perfectly visible in Figure 5 where the load is continuously increased. The red colour represents the stress close to the tensile strength and continuous cracking of the slab from the centre of the slab to the edges. The extending middle part to the edges uses just the residual tensile strength of the steel fibre reinforced concrete after cracking. Additionally, these stresses show the places with crack formation in the middle of the slab and their spreading of cracks during the increasing of the load. 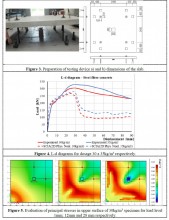 Figure 6 represents a graph of the dependency between the load level and the stress-strain for the most critical point in the middle of the slab and upper fibres. When looking at the Load-Stress distribution, it can be deducted that the behaviour of the structure is linear till load level 55kN. The structure is approaching the top of the stress strain diagram peak. A strain very close to 0.1‰ is reached. After that there is a phase of crack formation and the stress is coming down significantly based on the stress-strain diagram. The residual strength in tension (1,09MPa) is reached nearly at load level 100kN corresponding to a strain of 0,3‰. A load higher than 100kN means the spreading of the cracks with smooth hardening of the material done by the increasing branch of the stress-strain diagram in tension till maximal value of 1,13MPa and the plastic load is reached by the load of 283,9kN where the strain reaches the limit of 25‰.

In addition, a non-linear analysis method has been developed for simulating the real behaviour of the structure based on the non-linear stress-strain diagram with respect to cracks. This analysis method was proven to provide a very good comparison with real-life test results. A comparison was done for the deflection of two slabs made from C40/50 with fibres DRAMIX 5D 65/60BG and dosage 30kg/m3 and 35kg/m3 respectively. The comparison of the maximal loading capacity mentioned in Table 1. clearly indicates the higher maximal load is achieved by the test. This indicates the non-linear FE calculation provided in SCIA Engineer is on the safe side.