Since civil structures are frequently designed and constructed with miscellaneous materials (e.g. steel, prefab and in-situ cast concrete), the static system of the structure changes during its erection. This module enables you to calculate structures that consist of 1D and 2D elements in different phases. The stress history is calculated by taking into account added or removed supports, members, load cases, changing cross section properties etc.

Modern civil engineering structures are often designed and constructed as hybrid systems consisting of steel, pre-cast concrete and cast-in-place concrete. Main load-bearing elements are frequently fabricated in advance and are used as a supporting system for parts of a cross-section or structure to be produced later. Thus, the static system of the structure changes during its construction.

The evolution of the static system of the structure in each stage is taken into account through: 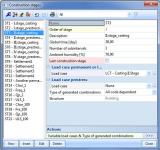 As an extension to the linear calculation of construction stages, the nonlinear analysis considers in a specific stage the geometry of the deformed construction from the previous stage. In SCIA Engineer, this analysis type can be applied to 3D frame structures.