SCIA Engineer provides a comprehensive solution for modelling, analysis and design of composite floors. The software automates the two principal tasks that engineers need to tackle with in order to achieve a safe and executable design:

What is more, the composite entities are integrated in advanced engineering design workflows: by modelling the slabs as well as the beams, it is now easy to represent rigid diaphragm behaviour, to capture nonlinearities. The engineer can employ stability, modal, seismic and second-order analysis with initial imperfections in order to understand the behaviour of the building as a whole.

Therefore, engineers can now use the same platform to create sophisticated models in a 3D CAE analysis environment and to run design checks and code-compliant optimisation on all or selected composite beams in these models.

The Composite Analysis Model (CAM) in SCIA Engineer analyses the entire structure during the stages of construction, service or maintenance. Stages are fully automated, which means that you can work as usual and in a linear context: for load combinations, analysis, results, etc. Deformations and load effects obtained from the different stages are superimposed, also taking into account the actual shear connection between beams and slab and the creep in concrete.

There are no limitations on the structural system or on the arrangement of beams: the composite beams may be simply-supported, continuous, or cantilevers, parallel to each other or with arbitrary orientation. The CAM detects which beams are primary and which are secondary based on the steel sheeting orientation. This is taken into account in the checks and AutoDesign later on.

The CAM derives the exact orthotropic properties of the corrugated steel sheeting and the concrete topping and uses these in the FEM calculations. The stiffness of the composite beams is augmented based on the degree of shear connection between beams and slab.

For a more accurate stiffness estimation of e.g. cellular beams and other beams with openings, the CAM also takes into account all openings in the webs of the steel beams. Web openings modelled on 1D members are later on considered in the design modules. Cellular beams can also be designed using the Cellbeam design tool by the British fabricator Westok. A bi-directonal link is available between SCIA Engineer and Cellbeam for export and import of both steel and composite beams.

Internally, the software manages three FEM submodels with different stiffness of the composite slabs – one for the construction stage and two for the final composite stage: with long-term and short-term stiffness. The stage-based model includes rheological effects (i.e. creep) by distinguishing between long and short-term load cases in the final (service) phase.

The engineer can let the software fully manage load cases or combinations between the different stages, or he/she may manage them manually. In addition, the software automatically takes into account that fresh concrete weighs more during the construction stage due to its higher water content. Fresh concrete is also considered as a variable load with appropriate safety factors. This is due to the delivery methods and the fact that liquid concrete can heap in specific areas of the slab and on individual beams.

Two mathematical formulations of the composite slab with steel beams are supported. The default one ("standard composite action") allows us to avoid normal forces from the eccentricity between the slab and beams in the FEM model. This idealisation is suitable for the majority of design tasks and is the only one compatible with the design methods described in AISC 360 and Eurocode 4. In this formulation, bending moments in the beams are increased and match simplified load descending methods usually used in hand calculations.

The second formulation ("advanced composite action") is based on the actual cross-section properties and alignment of the beams. As a result, normal forces are generated in both the beam and the deck as a result of the eccentric placement of the 1D member. The latter approach is useful for more advanced analysis of the whole composite structure.

Rigid diaphragms simplify the analysis model based on reasonable assumptions that are verified by decades of engineering experience. Lateral loads are distributed to vertical load-bearing elements based on their stiffness, while gravity loads are distributed to the floor beams based on tributary areas. Results obtained from such a numerical formulation of the composite slab are directly comparable to hand calculations and parasitic moments in various parts of the structure are avoided.

Flexible diaphragms are useful for the modelling of steel decking roofs. Such roofs are often found in buildings where the floors are composite but adding of a concrete slab for the roof is, in most cases, not financially justified.

Semi-rigid diaphragms are a good solution when you want to use the tributary area load distribution method for gravity loads but would like to keep the FEM formulation for lateral loads. This is often needed in the case where openings in the slab compromise the lateral rigidity of the floor in certain parts.

The following libraries simplify the definition of a composite floor:

During modelling, you select products from the library or defines decking or studs manually. You can further extend the decking library with their own sheets. Filtering based on various criteria (e.g. the manufacturer or a wildcard) is also available.

The design of composite beams is performed according to EN 1994-1-1 and relevant parts of EC2, EC3 and a number of Steel Construction Institute (SCI) publications on the topic. The following is included:

As already indicated above, cellular beams can also be designed using the Cellbeam design tool by the British fabricator Westok. A bi-directonal link is available between SCIA Engineer and Cellbeam for export and import of both steel and composite beams.

The following checks are performed:

The AutoDesign routine cycles thought all ultimate and serviceability checks and detailing conditions in the construction and final stages, and proposes suitable cross-sections, stud layouts, and camber values that fulfil all design code requirements, also in the case of web openings on the beams. The resulting solution is economical, yet safe; limit states and detailing are fulfilled in one go.

The optimisation is controlled by you in the following ways:

The AutoDesign is limited to hot-rolled I-sections from the Profile Library (user-defined extensions are supported). Sheet-welded sections are only checked; nevertheless, stud and camber design are performed for welded sections.

Structural fire design according to EN 1994-1-2

Code-based design according to AISC 360

The design of composite beams is performed according to the AISC 360-16 standard and includes the following:

The AutoDesign routine cycles thought all ultimate and serviceability checks and detailing conditions in the construction and final stages, and proposes suitable cross-sections, stud layouts, and camber values that fulfil all design code requirements, also in the case of web openings on the beams. The resulting solution is economical, yet safe; limits states and detailing are fulfilled in one go.

The optimisation is controlled in the following ways:

Floor vibration checks can be performed on composite beams separately from the verifications described above, following the methods prescribed in the 2016 AISC Design Guide 11: Floor Vibrations Due to Human Activity.

This functionality lets engineers deal with a serviceability limit state that often dominates the design of composite floors: floor vibration often interferes with human comfort when not addressed, due to the light weight of the composite floor structural system.

The module Composite Steel-Concrete columns EC4 is a module for structural design and code-checking of composite columns. It calculates their strength, stability and stiffness in accordance with EN 1994 for buildings.

Composite columns composed of concrete-filled steel tubes (CFT) have become increasingly popular in structural applications around the world. This type of column can offer many advantages, such as high strength, ductility, and large energy absorption capacity, as well as increased speed of construction, positive safety aspects, and possible use of simple standardized connections. Furthermore, today's possibility to produce concrete grades with higher compressive strengths allows for design of more slender columns, which results in larger floor space. 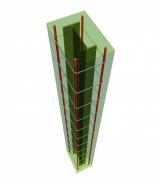 Design checks can be carried out for six rolled or welded types of composite sections as illustrated in the image below.

The design checks for composite column sections are based on the simplified method of design which is applicable to prismatic column sections with doubly symmetric sections. Different checks are performed.

Resistance of members in axial compression

This type of check contains:

The resistance of a member to combined compression and uniaxial bending is evaluated by means of an interaction curve (clause 6.7.3.6)

The resistance of the section under combined compression and biaxial bending is evaluated according to clause 6.7.3.7 equation 6.47.

Influence of transverse shear on resistance to bending

The influence of transverse shear forces on the resistance to bending and normal force is considered when determining the interaction curve as per clause 6.7.3.2(3)

Longitudinal shear at the interface between concrete and steel is verified in accordance with clause 6.7.4.3

Following are the calculation models used to check the resistance of a column in a fire situation: