Different methods are available for the loads transfer via load panels :

Which one to choose?

By default, the method is « Tributary area » : loads are distributed according to the break lines.

But this method is available only with uniform surface loads on the whole panel.

In case of partial surface loads on a panel, or triangular loads, or trapezoidal loads, …, a warning will be displayed because we need to use another method.

This method is close to the tributary areas method, because the distribution is divided by 2 on each side. 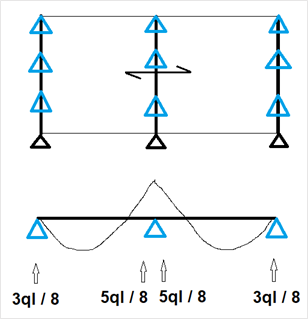 In this last case, the load is distributed according to factors.

In the above example, the load would be distributed by 1/3, 1/3, 1/3 on each bar, because factor 1 is defined on each bar (even if the load is a linear or a point load in a corner of the panel).

The distribution doesn’t take into account the loads locations, but rather the defined factors.

This method is less used than the others.

Let’s have a look at the simple example below :

Let’s apply a surface horizontal load on each panel.

Results are in line with the previous description of this option : 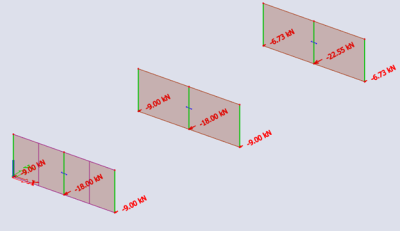