Friction supports can be used to model the fact that a reaction component depends on another component. The horizontal component for example depends on the vertical component. When the friction force is surpassed, the support slips through resulting in large deformations.

Friction supports can be used for several types of structures. Almost every support which isn’t rigidly connected to the surface on which it stands is subjected to friction.

Example of the usage - Scaffolding 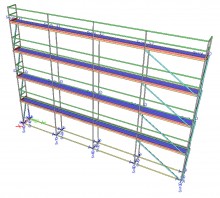 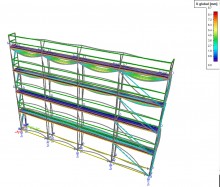 The von Mises yield condition is suitable for ductile materials in general, such as metals (steel, aluminium etc.). It corresponds to a bilinear stress-strain relationship, identical in tension and compression. The plastic branch may have a slope (hardening modulus) or not.

It is a symmetric behaviour, acting in the same way in tension and compression, with or without hardening in the plastic branch.

Tresca yield condition is known also as the maximum shear stress theory. This condition could be also used for metal materials.

Drucker - Prager yield condition is most often used option for concrete where both normal and shear stresses can determine failure. This yield condition can be used for modelling of behaviour of punching, short corbel and for identification of truss analogy to model strut and tie models.

Mohr-Coulomb yield condition is often used to model concrete, soil or granular materials. Condition is similar to the Tresca criterion, with additional provisions for materials with different tensile and compressive yield strengths

Plastic behaviour with other non-linearities

The plastic behaviour of materials may be combined with other types of non-linearity in SCIA Engineer. For instance, plasticity, press only supports and large displacement analysis can be used together. Tension only 1D members with a plastic limit forces may be used to model the behaviour of bolts in a connection.

A typical application of general plasticity is a detailed analysis of non-standard steel connections for which simplified methods do not apply. It may however be applied to any structure that can be modelled using 2D members.

Plasticity is not supported for 1D members. Any beam or truss member that is present in the model is considered as elastic. 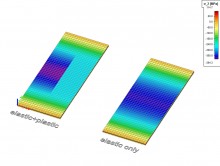 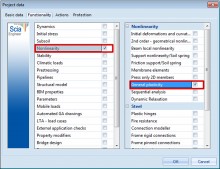 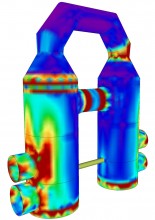 Analysis of 2D members capable of resisting only compression forces. It can be used e.g. for analysis of masonry walls and arches. 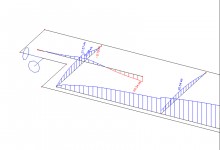 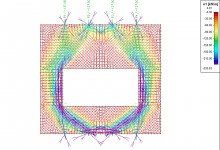 This model gives the user a very good insight into the behaviour of structures such as shear walls or building cores. It is possible to effectively model (reinforced) concrete or masonry structures in a 3D environment. Using a non-linear analysis, the user can reduce all tensile stresses in the concrete or masonry finite elements, which results in a system of compression-only finite elements. The model is capable of displaying the internal arches/struts above openings and doors. Also lintels above openings can be easily modelled and considered in the calculation as hinged beams. Reinforcement in the concrete, capable of resisting the tensile forces, is modelled as an internal rib with the area and stiffness of the reinforcement grade. Using this so-called strut and-tie model the user gets a complete tool to design and check the reinforcement in walls.

A non-linear analysis is performed in order to calculate with the pressure-only finite elements. Using a set of iteration steps the stiffness in the direction of the tension stresses is reduced, thus effectively reducing the tensile stresses in the structure. If the geometry of the structure is such that a new state of equilibrium in ultimate limit state is found, i.e. by internal arches or reinforcement, the convergence criterion will be reached.

The pressure only finite 2D-elements is a must have add-on for the engineer who calculates 3D-structures or 2D-walls in day-to-day practice. This module supplies an adequate insight into the structural behaviour of the structure. Using this module the user can effectively model masonry or reinforced concrete structures. Practical applications can be masonry walls with openings, concrete walls with openings, special concrete details like tooth-supports of beams.