Serviceability design criteria are important for people's comfort, as well as the integrity of separation walls, façades and other non-load-bearing elements and finishes. This is why we put an additional focus on this aspect of the design of steel members and we extended the existing check of Relative deflection with:

With these extensions, SCIA Engineer lets steel designers check and report the relevant SLS requirements and comply with the Eurocode or Swiss standard (SIA 263) on the level of serviceability.

On the level of settings

The first major improvement users will notice is on the side of inputs. The definition of design criteria has been simplified; namely, by setting four deflection limit values only, users will be able to cover the majority of design cases: the deflection limits for variable and total loads in-plane and out-of-plane are defined in the Steel Setup for the whole structure. 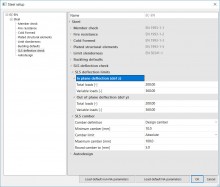 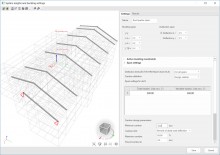 SCIA Engineer automatically recognises spans in the majority of cases: beams, columns, bracing, walls and plates restrain other members they cross (or do not, depending on the angle at which these members cross). The System length settings let the user edit the automatically recognised restraints on similar members at the same time. These settings also define how relative deformations are calculated: at a restraint, the relative deformation is zero; along the span, the relative deformation is recalculated based on the total displacements and assumed restraints. The result are realistic deflection values that are much lower than the global displacements, especially for taller structures.

Using the automation and flexibility of these settings, users can achieve economic design solutions and handle deflection checks correctly, also in the case of complicated structures where different parts have different functions and serviceability requirements.

In essence, the SLS deflection checks are simple: one needs to make sure that the relative deformations remain below the limit values. The difficulty here lies in the calculation of relative deformations, and in the distinction between permanent and variable load deflections (especially in the case of nonlinear analysis results). The software handles these challenges automatically, and no action is required from the user.

The software checks deflections from the total load and from the variable load alone, in one or in two directions (in-plane and out-of-plane) if the user wishes. Reference lengths and lateral restraints are detected automatically but can be modified manually. We take into account that cantilevers beams can have double the deflection values and still fulfil serviceability criteria in terms of curvature: for cantilever spans, the deflection limits values are multiplied by 2 in the background.

These newly extended SLS checks (including camber design) are available for projects calculated according to the EuroCode or to the Swiss standards.

The user can specify whether camber should be foreseen on the beams for the main bending direction. If yes, he/she can input the camber values per span, or let the software determine the camber within specific production limitations.

When camber is designed, the user can describe the production practice of the shop where the beams will be cambered:

The cambered shape is parabolic for spans supported on two sides and linear for cantilever spans. In addition, when cambering spans that are split into multiple beams, SCIA Engineer is able to address the critical load combinations for each of the beams in the span and determine a camber value that fulfils all deformation requirements. 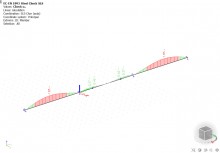 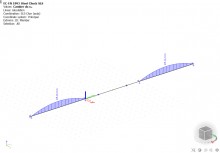 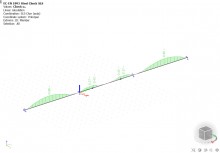 The report of the SLS checks lists the relevant deflections and the load combination these result from, the deflection limits, unity checks and values of camber.