The seismic Equivalent Lateral Forces (ELF) analysis is the most well-known method for the seismic analysis of structures. Although it is quite conservative, its simplicity makes it a very popular method for seismic design.

Calculation of the Equivalent Lateral Forces

Possibility to select how the acceleration is distributed in the building: 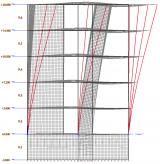 Application of the storey forces to the model

As results, all standard result output can be used in SCIA Engineer, without any restriction. Also, because it is a static load case, none of the issues related to the loss of sign due to the modal superposition apply here.