Details of Interpolation types for FEM results on 2D members

When visualizing results for 2D members in SCIA Engineer, it is possible to display 4 different views on the same result by selecting one of these options for the 'Location' parameter: 'In centres', ‘In nodes no avg.’, ‘In nodes avg.’ or ‘In nodes avg. on macro’.

When we run the initial FEM calculation, the solver calculates at first the internal forces in the integration points. An integration point is a point within a finite element at which integrals are evaluated numerically. These points are chosen in such a way that the results for a particular integration scheme are the most accurate.

The calculated values from the integration points are extrapolated to the nodes of the finite element. In each node are multiple values. If these results differ a lot from each other, we'll see significant colour jumps between adjacent mesh elements. This is an indication that the chosen mesh size might be too large.

For every mesh node, the mean value is calculated from all the adjacent finite elements. Because of this, the graphical display is a smooth course of isobands.
This type of results can be used for a single 2D member but should not be used:

For every mesh node, the mean value is calculated only from the adjacent finite elements which belong to the same 2D member and which have the same directions of their local axes. This resolves the two 'problems' mentioned at the option 'In nodes average'.

The difference between the last two options is further explained below.

'In nodes average on maco' shows us that there is a moment between the blue and red zone that results in a negative and positive peak on it's left and right side. 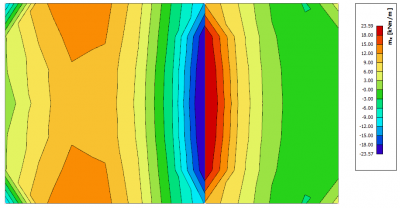 'In nodes average' calculates the mean value of these peaks resulting in a value near zero. This might give us an incorrect result. 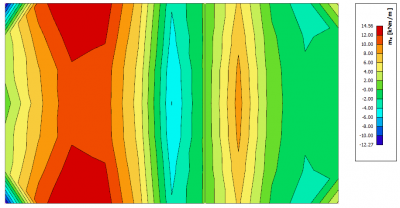