How can peak values be averaged?

This plate is calculated linearly with the only load case being the self weight.

The results for the reinforcement moment on the top mx, D+ show the expected peak values at the supports.

Several things can be done to reduce the peak value.

At first the support are made flexible. 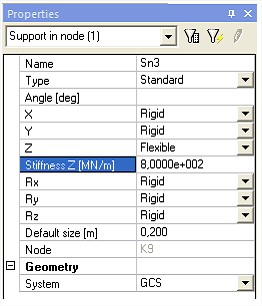 Subsequently, the results can be averaged by means of redistribution strips.

We choose a redistribution strip around a point with a length and width of 2m. The direction in which the averaging is done, is set on both directions. In the reference manual you can also find an elaborated explanation about how to use the redistribution strips (with examples).

To indicate that the redistribution strip is taken into account for the representation of the results, you also have to tick on the ‘averaging of peak’ in the properties window of the results. 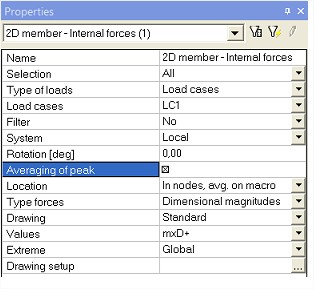 The averaging strips help to average the peak values, but still the result is not satisfying.

That’s why we proceed with a better modelling of the supports. The supports are modelled better as surface supports than as point supports (in reality the columns are not points, but they have a surface).

To do this, a subregion has to be made in the plate where the column has to arise.  To this subregion, a subsoil is attributed. This subsoil is given the right rigidity properties by the user, calculated from the rigidity of the column. The point support has to be removed afterwards. 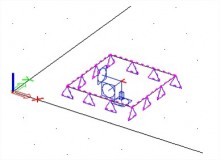 This has the following results (only the support bottom left has been replaced by a flexible subsoil).

Notice that the peak stresses no longer arise.

Working with a flexible subsoil instead of a point support, results in a better modelling of the reality. The arising of peak stresses is also recued considerably.