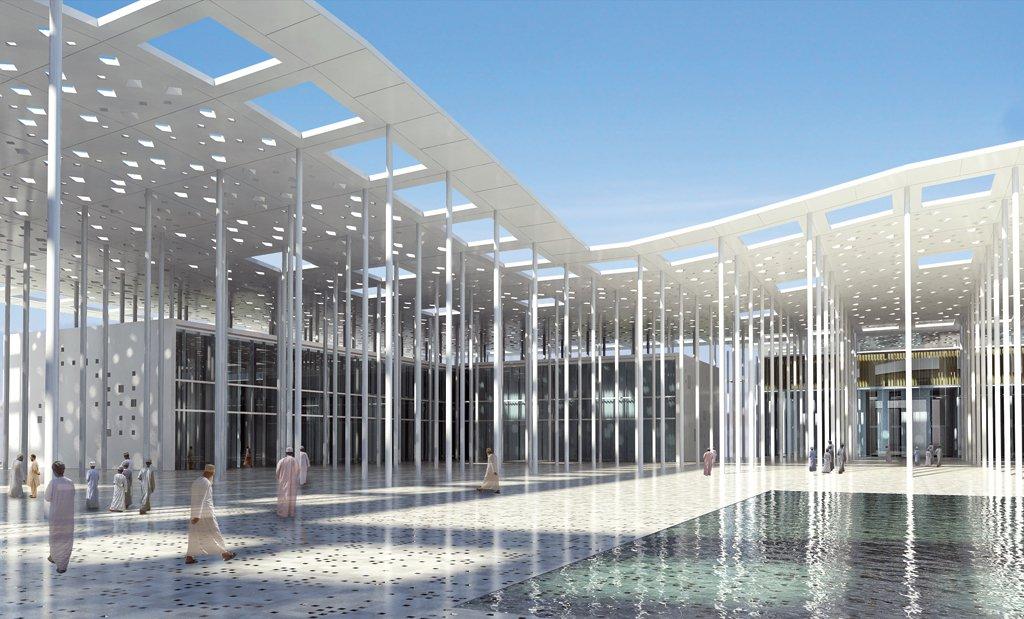 Details of Canopy in Muscat

Presentation of the project

The Ministry of Heritage and Culture (MoHC) of the sultanate of Oman had the ambition to construct a large cultural centre in Muscat and transform it into a meeting place and true urban centre of the city. AS Architecture Studio has thereby proposed a project consisting of several large groups of buildings, clustered under a think perforated cover – the canopy.

The great challenge of the project is the immense perforated canopy of 40.000 m2, which curves and distorts in function of the geometry and the height of the buildings underneath.

During the earlier stages of the project, the mission of Setec Bâtiment (France) consisted of conceptualising the shape of the canopy in cooperation with a group of architects. A number of technological solutions were proposed, and then studied using SCIA Engineer: perforated panels, a concrete shell and a metal structure with GRC panels.

Once the general outline of the structure was established, Setec Bâtiment analysed the integrity of the structure and the size of the individual elements. Buildings on which the canopy is supported, the theatre in particular, were an object of detailed analysis and calculations.

A complex geometry that was easily modelled

The canopy is of very irregular geometry – its height varies between 13 m at the fringe and 35 m where the theatre is located. It is supported on a column grid of 5 m x 5 m. This elaborated cover is an assemblage of numerous curved zones with both single and double curvature. A choice to use a grid of steel beams, curved or straight depending on the location, was finally made for the primary load bearing structure. The initial geometry was contoured using the graphical plug-in Grasshopper (tightly integrated with Rhinoceros 3-D modelling tools) in order to facilitate the beam production and thus reduce the overall canopy cost. The metal frame was then covered and sealed with a complex steel container and  concrete to ensure that the canopy is braced and remains positioned as planned. Skylights are provided regularly to ensure that sunlight can reach the canopy.

The various 3D models of the structure were imported and analysed in SCIA Engineer by importing the different layers of the 3D drawing files. The elements of the structure: bars, lines or 2D members are then generated. As a result, it is extremely easy to assign sections, materials or to make changes to each element.

The dynamic response of the canopy has been investigated. The use of a rigorous 3D model ‘canopy and buildings integrated’ allowed highlighting the phenomenon named ‘bullwhip’, which can occur in the canopy. Because of the difference in stiffness between the concrete buildings underneath and the steel-frame canopy, this dynamic phenomenon results in the amplification of seismic forces. The dynamic analysis also allowed us to study the effect of bracing on the canopy. In addition of the mentioned vertical irregularity, there is a horizontal difference in rigidity due to the presence of bracing under the canopy. The canopy rests on highly slender poles of height of up to 25 meters with a diameter of 30 cm. Therefore, it has relatively flexible behaviour and displacements are difficult to limit.

The flexibility of SCIA Engineer

SCIA Engineer is equipped with a flexible interface which helped us in our modelling tasks in different aspects. Using the software made it possible for several engineers to work together on the project; the work of individual members of the team can be regrouped into a single file in SCIA (one works on modelling the buildings, another models the canopy).

Also, the possibility to import *.dwg files of the thorough geometry as either bar or shell elements allowed us to gain time and precision tremendously.

Last, but not least, we needed to adapt to the norms used by the various contractors who were selected to complete the project in Oman. We had to work with the American standards AISC LRFD for the metal frame, with the British standard for the concrete elements and with the UBS for seismic design. SCIA Engineer allowed us to switch rapidly and easily between these different norms. 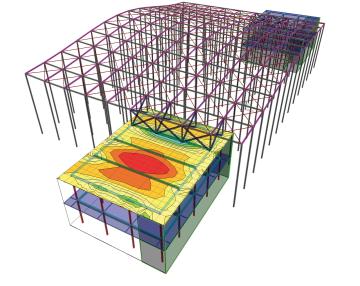 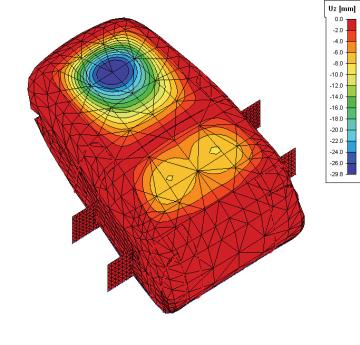 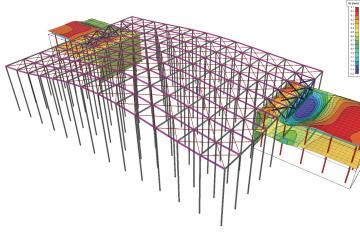 The Setec Group: Setec Bâtiment is an affiliate of the larger Setec Group; it specializes exclusively in the design of buildings. Established in 1957, the Setec Group is among the utmost prominent French engineering companies with international representation, having more than 1,700 employees distributed in its 25 branches, and a turnover of more than 188 million Euros.

Setec Bâtiment: multidisciplinary and innovative - Setec Bâtiment offers high technical competence, with more than 230 employees with skills in all fields of construction science: along with structural design, environmental design is also considered. Through intense collaboration between the different technical disciplines within the company, but also with external collaborators, from the onset of a project, allows for the creation of integrated and innovative solutions.

Setec Bâtiment has recently created Praxice, a company which includes teams dealing with environmental designs and designs related to the maintenance and exploitation.