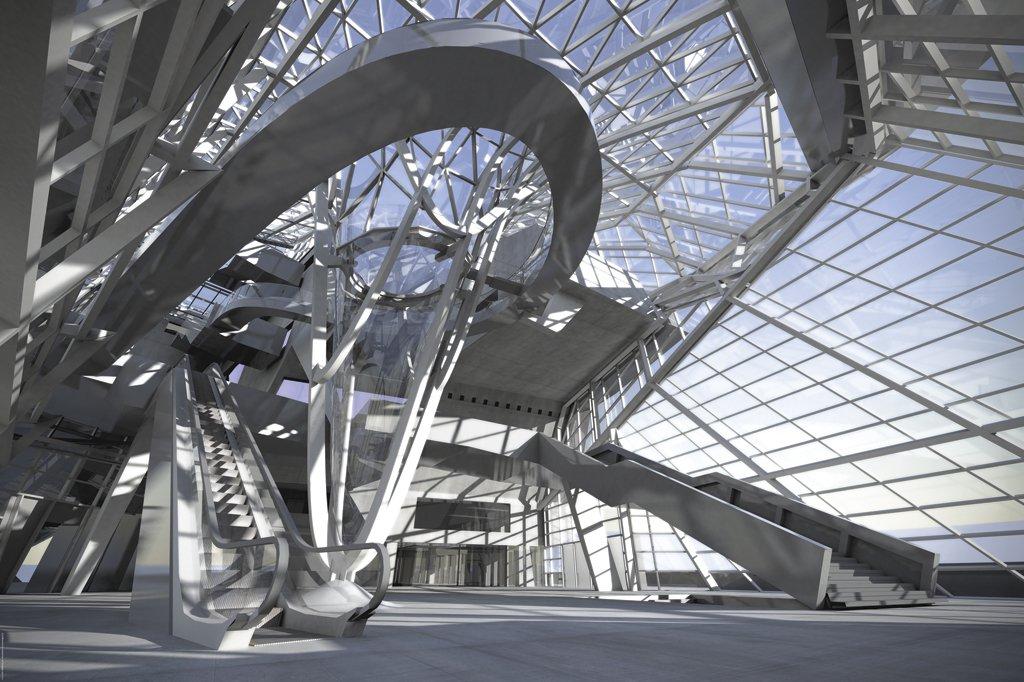 1999, the General Council of Rhône-Alpes (France) decided to launch a design competition for the new ‘Musée des Confluences’ of Lyon. This building, situated at the confluence point of the Rhône and the Saône, will include a museum of science and society. The design of the Austrian architect Coop Himmelb(l)au Architects was chosen. The project, since 2010 under the responsibility of Vinci, the largest French contractor and top 3 worldwide, is scheduled for opening in 2013. TE France is in charge of the project design and management of this work of art.

The design of Coop Himmelb(l) au meets the scientific and cultural requirements: the composition of the building combines a crystal and a cloud; respectively symbols of the known and the unknown, or, the familiar environment of the present and the uncertain vagueness of the future. The building rests on a base; the cloud seems to hover above the Jardin du Confluent (Confluent Garden), about 8 meters above the ground surface. It is cladded with a metal casing in which colours and light are reflected and which captures the multiple echoes from the sky, the city, the water and the green surroundings. In contrast to this, the transparency of the crystal clearly marks the entrance to the museum at the north side.

Description of the structure

The structure consists of 3 entities: the base, the cloud and the crystal. The base is made of concrete in one to two levels. The cloud represents the largest part of the building. It is a 7-storey steel structure (main structure), “capped” by a steel shell which abuts on the base with only 3 concrete piers and 12 enormous columns, positioned independently from the base. The horizontal reactions of the structure are exclusively supported by these columns and piers.
The crystal is a structure of fully glazed steel, supported partly by the base and partly by the cloud. It consists of a secondary structure resting by connecting posts on a primary metal structure. The links between the cloud and the crystal allow slippage between the two structures.
The entire building is founded on piles and micro piles for the base and on barrette piles for the piers and columns.

Scia Engineer has been used to conduct several studies:

Initially the studies focused on separate models: the crystal on supports with the stiffness of the base, steel shell (1.000 supports), main structure with the piers and columns.

Because of its complexity, the structure could not be considered in a conventional manner. The major challenge was to consolidate all the separate models to assess the complete structure with concurrent load cases (including wind effects resulting from wind tunnel tests and temperature loads).
With the release of the “load panel” tool in Scia Engineer, it was possible to establish the complex loading of the full model.
The construction phases (e.g. casting concrete of slabs in the cloud and not in the crystal) could be done through the deactivation (absences) of certain elements depending on the load cases.

The complete model is actually composed of two sub-models thanks to the possibility to deactivate beams and supports per load case:

This complexity in the management of absences allowed us to have just one single model to take into account.
The full model contains about: 27.000 nodes, 32.000 beams, 7.000 load panels and 588 different cross sections. 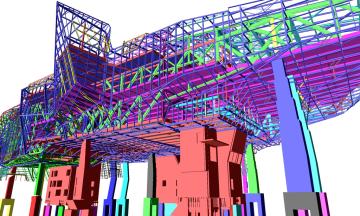 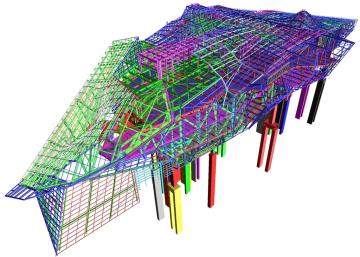 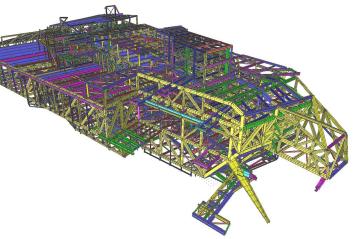 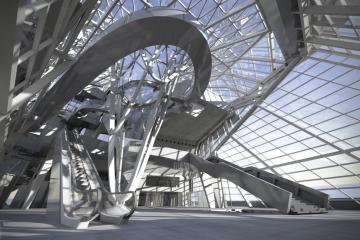 Our unique solutions bring added value to clients in public as well as private markets all over the globe. Headquartered in Brussels (Belgium), and with offices in twelve countries and projects in over 80, Tractebel Engineering undeniably is a top-level partner for every single of its clients.

Tractebel Engineering is a business unit of GDF SUEZ Energy Services, the European leader in multi-technical energy related services and one of the key business lines of GDF SUEZ. Our clients fully benefit from the many synergies we share with the wide array of GDF SUEZ Group companies.