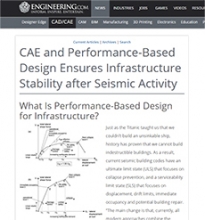 What Is Performance-Based Design for Infrastructure?

Just as the Titanic taught us that we couldn’t build an unsinkable ship, history has proven that we cannot build indestructible buildings. As a result, current seismic building codes have an ultimate limit state (ULS) that focuses on collapse prevention, and a serviceability limit state (SLS) that focuses on displacement, drift limits, immediate occupancy and potential building repair.

“The main change is that, currently, all modern approaches combine the performance-based design with the displacement-based design and assessment,” said Gregory Penelis, civil engineer and managing director of Penelis Consulting Engineers S.A.

“So, in essence, when we refer to performance-based design we actually mean displacement-based design for seismic excitations,” Penelis explained. “Instead of defining a strength requirement for a structure, the displacement capacity of the structure is defined and specific performance levels are defined.”

How Simulation Can Assess a Building’s Performance?

When dealing with linear analysis, “European codes use the modal response spectrum analysis while the American standards call for the use of the lateral force method of analysis,” noted Penelis. “This difference is significant as the two methods have very distinct advantages and disadvantages.” [...]

As for nonlinear analysis, Penelis notes the difference between the point hinge approach and the fiber model. The point hinge approach uses moment vs. slope diagrams (M-θ diagrams) and it is used in many different software offerings. However, the cores and shear walls cannot be modeled using 2D elements so this method requires the use of linear finite elements for 2D components. He noted that this can create unknowns with respect to connectivity and the M-θ diagrams. [...]

As an alternative, Penelis remarked that the fiber model method will create a more accurate solution for element plasticity. He said, “The method is also able to use more complex wall sections and cores as their plasticity is inherently inserted into the model of the element. This accuracy requires deep knowledge of material properties and their interface. Therefore, such a modelling approach can be extremely risky for practicing engineers not familiar with nonlinear analysis unless specific software is used to deals with these issues such as SCIA Engineer.”

It should be noted that almost any structural CAE software is able to perform an elastic analysis using either the lateral force method of analysis or the modal response spectrum analysis. This is also true of SCIA Engineer.
Current practices, however, are based on plastic nonlinear analysis. To accommodate this, “most commercial software packages started to adopt the point hinge method,” noted Penelis.

Read the full article on Engineering.com