Complete design of a structure for wind and snow loads represents a tedious task due to a great number of wind zones and load cases that must be considered in the calculations. Generators simplify the design process and speed up your work. You can use 2D or 3D generators for wind load. While the 2D Wind Load Generator is suitable for regular frames or halls, the 3D Wind Load Generator you to generate wind loads on closed 3D buildings. For snow load, 2D generators are available. The advantage here is that you can combine 2D generators for snow and wind.

“Coat” the wind can blow against 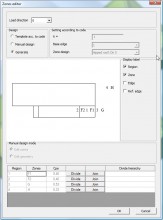 Before you can use the 3D Wind Load Generator, the model of the analysed structure must have “something” – a kind of “coat” - the wind can blow against. For a model with outer walls and roof inputted as a part of the analysis model, there is nothing to care about. But, for frame structures, it is necessary to define façade and/or roof panels on which the wind load can be applied. The principle of these panels is that, while the panel itself is ignored in the calculation, any surface load defined on the panel is automatically transferred to load bearing parts of the structure. The bearing parts are either the beams supporting the panel, or edges of the panel, or vertices of the panel.

All the “coat” elements, either the straight walls and plates or panels, are categorised by their function in the building as a wall or roof. For the roof also a proper type is assigned:

This categorisation is needed for automatic creation of wind zones on the “coat” elements. 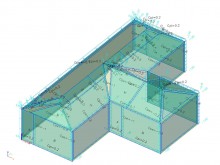 In addition to the type of the “coat” elements you must specify the direction of the wind and combination of signs (+ + / + – / – + / – –) for Cpe/Cpi coefficients. It is possible to input as many wind directions and sign combinations as required.

The 3D Wind Load Generator then takes care of the rest:

The generated wind zones can be viewed, edited, if required, or even input manually in the Zone Editor.

In normal working procedure, wind zones with related Cp values are generated by the generator.

However, if required, the generated zones can be edited or even input manually. Three possibilities are available for creation of the zones:

The graphical window displays both the generated wind zones and calculated Cpe coefficients. 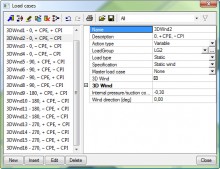 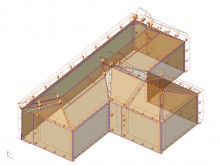 For the specified wind direction and Cpe/Cpi sign combination the appropriate load cases are generated. The generated load cases are added to the already existing load cases in the project and can be reviewed in the Load Case Manager.

The load in individual generated load cases can be reviewed in the graphical window. The view flags enable you to swap between seeing the Cpe coefficients and the actual load.

Wind and snow generators support the automatic generation of wind and snow loads on structures with 1D elements according to code recommendations. Based on a number of input parameters, climatic loads are generated on 2D frames - in 2D models or per plane in 3D models. 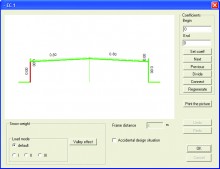 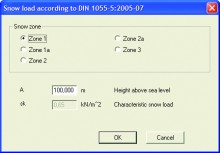 Pressure coefficients are calculated from the following properties:

Pressure coefficients may be adapted for both snow and wind loads. 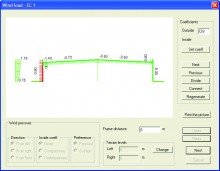 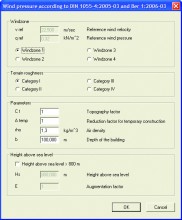 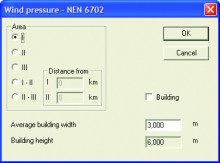 The following codes are supported: