Details of Warning: stiffness matrix is singular, structure is unstable

Sometimes when the analysis is launched, you can get the warning message 'The stiffness matrix is singular! The structure is unstable. Instability found in FE-node ...' and the calculation is stopped.

This message says that because of an instability, the computation cannot be carried on. It means that there is a problem with the degrees of freedom in the structure.

The node or member where the (first) instability is found, is indicated.

To help identifying the source of instability, once clicking on 'OK', a new window will appear were it will be possible to animate the model so to quick identify the part of the model that gives problems. 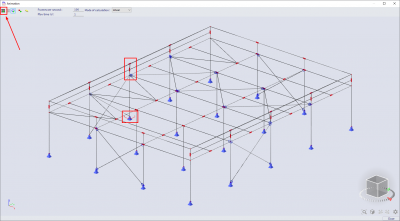 To run the animation, you should click on the Start animation button, in the upper left corner.

Note also that the place the problem arises can be identified by identifying the (mesh) node where the instability as been found, for instance the node N17 in the warning message above. To locate that node in the model, just type selmn (for a mesh node) or sel (for a physical node in the model) followed by the node number or full node name in the SCIA Spotlight. In case of a mesh node, the position of such a node will be highlighted in the main graphical window. In the case of a physical node, the node will be selected. 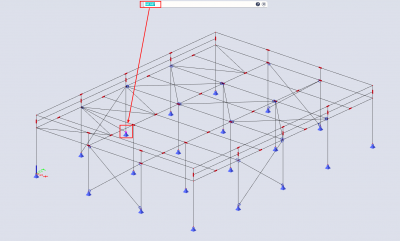 Let’s take a look at the example below. The problem is found in node N1, direction fiX (rotation around the x axis).

When you confirm the warning message window, an animation window will open. When you play the animation you can see what the instability looks like. We can see that the beams rotates around its own axis (x axis): 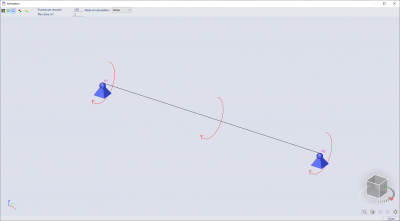 Tip: In a large project, it won’t always be easy to find the indicated member or node. The ‘selection’ command can prove to be extremely useful there: