Different types of coordinate systems are used in SCIA Engineer.
These are important for the modeling of the structure and the definition of loads and supports, and of course also for the interpretation of the results.

The GCS is the coordinate system which is visible and activated when creating a new project. The GCS origin and the directions of its axes are fixed and cannot be modified.

You can return at any time to the GCS via the option 'Reset to GCS position' under Coordinate system in the Status bar at the right top side of the interface. 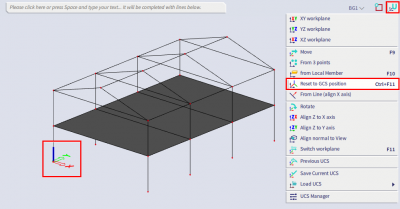 The UCS is a coordinate system defined by the user and it overwrites the GCS (the GCS can in fact be seen as a special case of the UCS).
A UCS can be created and adapted via the ‘Coordinate system' icon in the status bar: 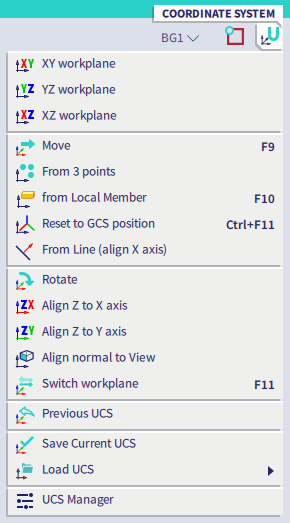 As said earlier you can switch back at any moment to the GCS via this icon.

All coordinates entered via the SCIA Spotlight relate to the UCS which is active at that moment.

Each structural entity in SCIA Engineer (e.g. a node, 1D member, 2D member) has its own local coordinate system.

For 1D members the x-axis of the LCS always coincides with the length axis of the beam and it is positive in the direction from the begin node to the end node.

The orientation of the x-axis can be reversed by swapping the begin and end node, e.g. via the ‘Reverse orientation’ command (Main menu > Edit > Modify or via searching for the command in the SCIA Spotlight).

The local y- and z-directions can be adapted if desired by means of a ‘LCS rotation’ via the properties of the 1D member:

For 2D members the z-axis of the LCS is always perpendicular to the element plane.

The sense of the z-axis can be inverted by selecting the option ‘Swap orientation’ in the properties of the 2D member. Also an ‘LCS angle’ can be entered to define a rotation of the local x and y axes around the local z axis:

Furthermore a distinction has to be made between the LCS of a 2D member, and the LCS of an element of the finite element mesh.
Each mesh element also has its own local coordinate system. Also here the z-axis is always perpendicular to the element plane. For the mesh elements of a curved 2D member, we can find for instance the following result: 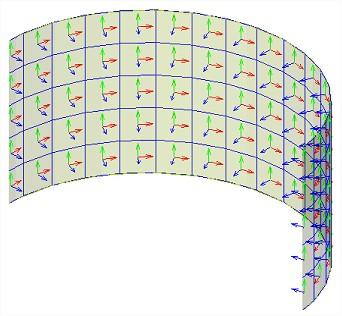