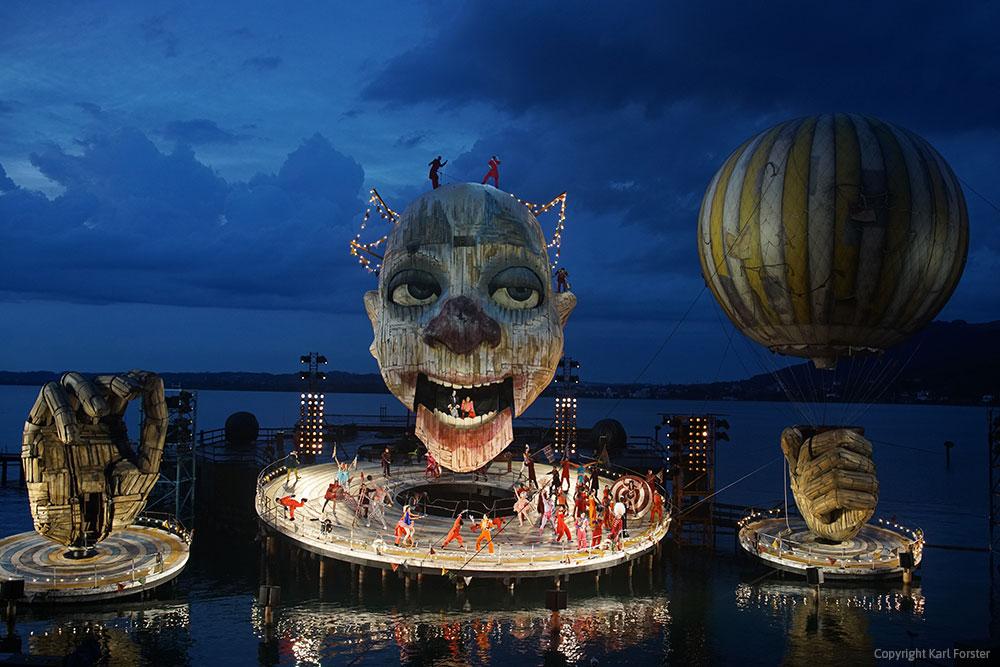 SCIA Engineer makes it possible: clown, machine and structure in one 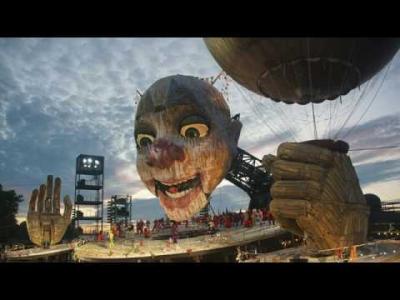 The Bregenz Festival in Austria is internationally renowned for spectacular stage designs and productions. The current stage design for Verdi's opera "Rigoletto", however, surpasses all previous ones in a special way. The structure on the lake stage weighs a full 140 tonnes and is a marvellous combination of art and engineering. It is not only the sheer size of Rigoletto's twelve-metre-high clown's head and the twelve-metre-long hands that are impressive in themselves. It is above all the sophisticated stage technology that sets the structure in motion at every performance and literally breathes life into it. What enchants the audience is the result of meticulous planning carried out by the engineering firm Lener & Schmid Ingenieure ZT GmbH with the support of SCIA software.

Behind the Rigoletto stage design, which was used for the first time at the premiere in 2019, there are more than two years of work from the initial idea to the final acceptance. For the experienced engineer Gerhard Lener from the engineering firm Lener & Schmid, this is already the tenth stage design at the Bregenz Festival in 20 years that he has been involved in. Rigoletto, however, is his most elaborate to date: "The more movement there is in a construction like this, the more challenging it is for us. And this one was meant to have maximum movement. It is more of a machine than a static structure," explains Lener from Vorarlberg.

A machine as a festival stage 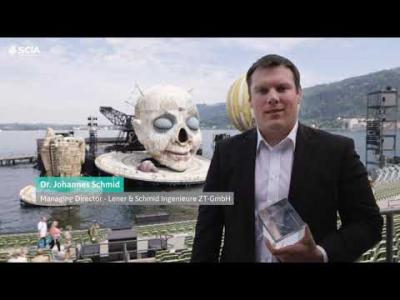 What the experienced engineer means by this becomes clear when you experience the stage set live. Rigoletto's head alone has a multitude of different movement possibilities, with the help of which the story of the opera is told. A swivel drive directs the head, which weighs tons, up, down, left or right during the performance. The eyes give the face expressions, not only by opening and closing the eyelids to match the action, but also the movement of the eyeballs up or down with a total of eight drives. The mouth can also open or close as desired. Inside, the head is hollow and can accommodate up to ten performers who use it as part of the stage.

To the left and right of the head are two hands, whose six-metre-long fingers can also be individually controlled by means of a hydraulic swivel drive, so that their movement resembles that of a human hand. In his left hand, Rigoletto holds a real balloon with a diameter of 14 metres, which is filled with more than 1,300 cubic metres of helium and, when weather and wind conditions allow it, rises into the night sky during the performance.

From the first draft to the 3D model

The basic idea for the imposing stage set came from the stage designers, who turned to Lener & Schmid with their design. Outside the Bregenz Festival, the engineers work for public-sector clients or specialist companies with a deep technical understanding. Working with artists is therefore always something special, which is the great attraction, but also requires a close exchange and a lot of mutual understanding. "We try to harmonise the artistic appearance, the required functionality, legal standards and technical feasibility, while implementing as much of the specifications as possible," says Lener. Using SCIA's software, the engineers first modelled the geometric representation and then analysed the movement of the rotating head.

No way without composite construction

One challenge the experts had to face right at the beginning was the distribution of the loads. This is because the lake stage is built on a fixed concrete core with a maximum load of 1000 kg per square metre. "We had to think carefully about how to distribute that. Because with Rigoletto that became extremely tight," explains Lener. It quickly became clear: it wouldn't work without lightweight and composite construction. "When you look at this stage set, you realise that it consists of many construction parts and materials. It starts with steel, goes through wood to fibreglass," says Lener. To save weight, the engineers rely on both a wood-steel composite construction and fibreglass-steel composite constructions. The formwork thus also becomes a load-bearing component. "This is where we benefited greatly from SCIA Engineer, as this software covers all these materials," explains the engineer.

The stage as a workplace

What makes the construction unique is that it is not only an object, but also the workplace of several actors and singers who perform in front of, on top of and even in the head. Therefore, it is important to consider strict safety requirements to protect the actors. In some cases, stunts are also performed in which people fall off the stage. All of this has to be taken into account in the design and dimensioned for the forces that this will exert on the structure.

"Analysis of different positions of the revolving head. Rendering of the face of the skin. Geometrical representation of the model is very close to the real shape of the head."

For the engineers, this means that they have to submit a verifiable structural analysis. The dimensioning is done according to the Eurocodes, i.e. corresponding European standards and dimensioning rules. For this, Lehner & Schmid had to provide precise models and verifications: "Keeping to the form of all the verifications was enormously time-consuming. Without software support, it would not have been possible to carry out the corresponding variants. This is the huge advantage of the SCIA Engineer software. It contains all EN standards and verifications. During the calculation run with SCIA Engineer, the solution of the system of equations, the determination of the deformations and internal forces was achieved within a few minutes," explains the engineer. This enabled Lener & Schmid to carry out the structural design and calculation quickly and also to contribute the necessary verifications in a timely manner.

Thanks to the precise planning in advance, there was hardly any reworking and the complex structure was accepted and fully operational on time for the start of the Bregenz Festival 2019. With the impressive and overwhelming performance, Lener & Schmid won the SCIA User Contest 2020 in the category "Special Projects". What was particularly convincing was the "analysis of the different positions of the rotating head. The representation of the face and skin as well as the geometric representation of the model, which is very close to the actual shape of the head", according to the jury's statement. During this year's festival season, the Rigoletto stage set was in action until 22 August 2021. Now it is being dismantled and the materials recycled. Because Lener & Schmid are already planning the next stage design - Puccini's "Madame Butterfly" in summer 2022.

Dimensions of the components 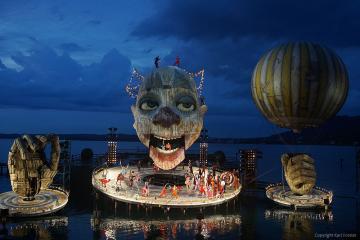 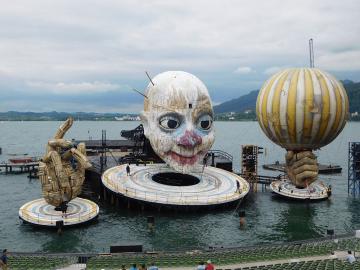 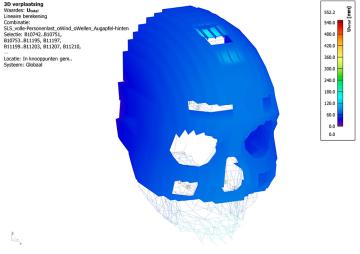 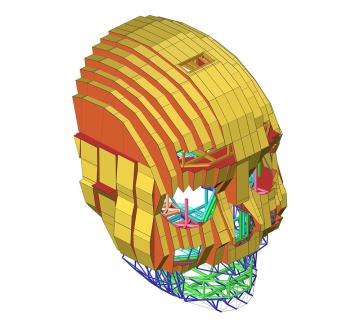 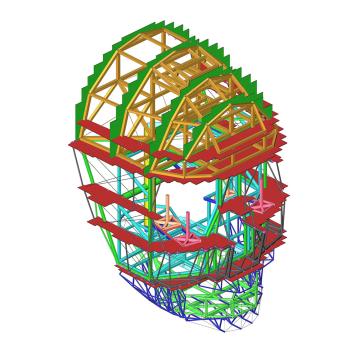 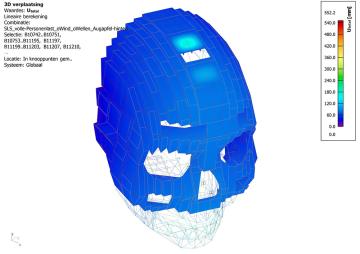 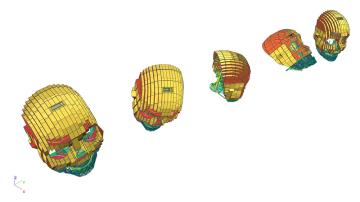 Main focuses of ZT-Büro Lener, beside the activity as a licensed proof engineer for steel constructions, ropeway constructions and cranes, the main activities of the company are static and dynamic calculations, as well as optimization of components using numerical calculation methods: Strength (FE method), Kinematics (multi-body simulation), Development of technical software. In addition, the technical competence and practical experience lies in the preparation of design drawings for plant construction.