The previous version of SCIA Engineer introduced bridge load combinations: the automatic generation of (envelope) load combinations for several types of bridges complying with EN 1990 and EN 1991-2. In addition to this, the first steps were taken for specific design rules and checks for reinforced and prestressed concrete bridges according to EN 1992-2.

We wanted to continue this effort, and therefore present you a list of improvements for both bridge load combinations and bridge design in SCIA Engineer 2013. 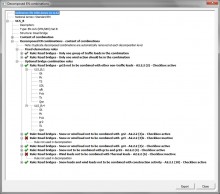 Improvements for Bridge Combinations according to EN 1990

Some protection improvements have been done, in order to correctly enable or disable the functionalities for bridge combinations.

What happens if the user chooses ‘Yes’ to continue:

What happens in case construction stages have been created before:

This may lead to a possible loss of data in the construction stages!

A new option has been added to the Construction Stages setup, for the selection of the Structure type. By default this type is set to Building. In case the ‘Bridge design’ and ‘Load combinations’ functionalities have been activated, the 3 implemented types of bridges are available as well: Road bridge, Footbridge and Railway bridge.

The Structure type is used for all construction stages and influences the automatic generation of (envelope) load combinations per stage.

The list of variable load cases, which the user can select from and add to a stage, is filtered out according to the selected Structure and Combination type.

For each constructions stage, code combination(s) and envelope combinations are generated with respect to the rules defined in the Manager of National Annexes.

The third improvement is a new equation for the generation of load combinations, which is in fact a general improvement not strictly related to bridge design. For ULS load combinations of type (STR/GEO) (Set B), the user can now also choose for the equation 6.10a ‘modified’ as described in EN 1990. The reason is that the National Annex may modify 6.10a to include permanent actions only, as is the case for e.g. Finland.

Improvements for Bridge Design according to EN 1992-2

When a concrete surface is subjected to abrasion caused by ice or solid transportation in running water, the cover should be increased by 10mm, as recommended in EN 1992-2 art. 4.4.1.2(115).

Therefore the parameter ‘delta_cabr’ has been added to the Concrete Setup window, and is available in case the functionality for bridge checks has been activated.

Whether to take this deviation value into account or not, has to be considered for each member separately. It is controlled by the new property of the Concrete 1D member data, called ‘Abrasion deviation’.

If the checkbox for ‘Abrasion deviation’ is activated, then the minimum cover cmin is calculated as follows: cmin= cmin+ delta_cabr .

If the material of a member is defined as concrete according to EN 1992-2, then the global imperfection should be calculated in a different way than for a standard EN 1992-1-1 material. The factor αm is not considered in the formula for θi and the factor αh has no lower limit:

This is taken into account now in SCIA Engineer, when calculating the design values of internal forces for columns used in bridge design:

If a member is assigned concrete class according to EN 1992-2, then the criterion for adequate rotation capacity for plastic analysis should be calculated in a different way than for a standard concretes, mentioned in EN 1992-1-1. Adequate rotation capacity for plastic analysis is achieved when the ratio of the depth of compression zone xu to the effective depth d is restricted as follows:

This is taken into account now in SCIA Engineer, when checking the calculated redistributed bending moment My using the method described in EN 1992-1-1 §5.6.2.

Another improvement is taking into account the prestressing reinforcement in the calculation of ρl, which influences the shear check. In fact, this is a general improvement required for both buildings and bridges.

As a little example, let us consider the following tensile reinforcement extending ≥ (lbd + d) beyond the section considered:

Then Asl is calculated as:

In case of a construction stage analysis, it is necessary to distinguish between 2 types of combinations:

SCIA Engineer 2013 presents a small improvement to meet the special requirements during execution, as defined by EN 1992-2 art. 113.3.2(103). Here it is stated that even for bridge elements in which the limit state of decompression is checked for the completed structure, tensile stresses less than k∙fctm(t) under the quasi-permanent combination of actions during execution are permitted.

Therefore, this verification is only available for quasi-permanent execution combinations, in case the functionality ‘Concrete checks extension’ has been activated and the model type is set to Construction stages. On top of this, the verification is only done for members requiring a decompression check.

A new item has been added to the check ‘Allowable concrete stresses’: fct,ex = k∙fctm(t) being the maximum allowable tensile stress in concrete during execution. The limit value for serviceability combinations is fcteff,qp. The calculated stress checked against these limit values is σclt,max. 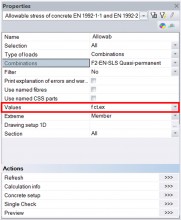 The factor k is available in the Manager for National Annexes; the recommended value defined by the Eurocode is 1,0.