How is the critical load coefficient determined via a stability calculation?

The critical load coefficient is determined by solving an eigenvalue problem via the following equation:

The beam will deform according to the green line if it is only loaded by the vertical load Fv. The value of the deformation is related to the elastic stiffness (Stiffness matrix Ke) of that element.
This beam will deform less (blue line) when there is besides the vertical load Fv a horizontal load Fh. This horizontal load Fh has a stiffening effect on the vertical deformation of the beam. This stiffening effect is taken into account in the geometrical stiffness matrix Kg. Kg is in fact a correction on Ke in order to get realistic results of the structure. SCIA Engineer searches during the stability calculation for a lambda value that fulfills the following equation
Ke = Lambda x Kg.
This is done by solving the stiffness matrices of the above equation. Below you can find an example of such stiffness matrices (Ke & Kg). 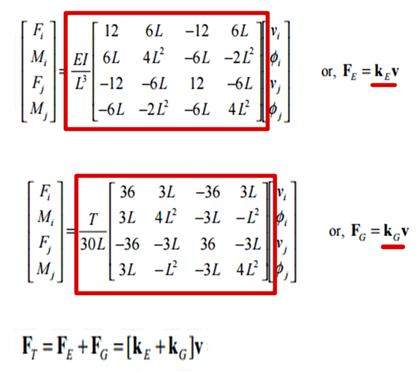